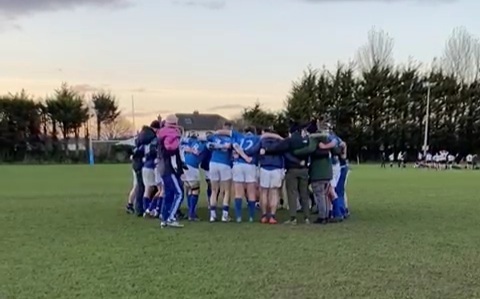 On Saturday afternoon at 2.30pm, both our 1st XV and our J2 XV kicked off in Templeville Road. The 1st XV were facing Navan RFC in the AIL, whilst our J2s faced bitter rivals Terenure College RFC in the “Dublin 6W Derby”. This particular fixture is the one all Mary’s and Terenure men and women love playing in more than any other match. The clubs are so close in location that full back Niall Donovan can allegedly kick a ball from one to the other. Teams are made up of friends and long-time rivals alike, and the desire to win is almost palpable on the day. The weather was cold and windy and Terenure opted to play with the wind in the first half after winning the pre-match coin flip, playing down towards the club from the Glendown end. With a big crowd on both sides of the pitch watching, the game began.


The game got off to a less-than-ideal start with Terenure driving over for a try after 3 minutes. Our lads were caught off-guard and a few phases of passes saw Terenure pile over the line. The conversion left it 0 - 7. The next 10 minutes or so saw some great clashes between our lads and their's, with big men on both sides letting their presence be known. On the 15 minute mark, the ever-reliable and always vocal James Bourke opted to go for the points when Terenure were penalised by the referee. 3 – 7. Just a few minutes later a silly mistake gave Terenure an easy 3 points and that left it 3 – 10. It just wasn’t clicking for us. Our set pieces were good, our scrums were strong and unwavering, and our defence was most impressive but we just couldn't make it work. 3 minutes before half time, Terenure took advantage of some quick hands and ran in for a try. No conversion meant the score at half time would read 3 – 15, unfortunately to the away side.


At half time, the Mary’s players huddled around their coaches - Lyonsy and GMack gave their orders while Lenzo could only watch from behind the posts as he was on dual Daddy/Coaching duties. Lyonsy passionately spoke of what the Mary’s/Terenure fixture meant to us – and that nothing short of a win would be enough. With a bit of tape and deep-heat holding some lads together, the second half was underway. Despite the talks about ‘Discipline’ and ‘No silly penalties’ at half time, after just 2 minutes an unnecessary error of judgement led to a penalty right in front of the posts. 3 – 18. That was it – the last penalty we would give away. Until 2 minutes later that is, when a similar error gave Terenure a lead of 3 – 21. There was now 35 minutes remaining, and a gap of 18 points between us. The lads knew nothing short of a total attitude change would be the winning factor. On minute 47 we got a penalty and Bourkey sent it into touch. Captain Fionan Magee, with his ever-steady hands, threw the ball in and it was caught by Benjamin Button himself, Mary’s stalwart Donners. DonDon Brooke caught the ball and was gently brought down by his lifters. A maul was formed and the drive was on. The ball found its way back to Fionan who only had to place the ball down as the pack drove over the line! Bourkey slotted it down the middle. 10 – 21. The game was on. Neither team could break the deadlock it seemed, until on minute 55, the returning McGov went for a quick tap and go on the Terenure 5 metre line. This was denied and the game paused for just a moment. Challenge accepted. McGov took the tap and go and despite the Terenure defence having the time to reset, it would have been easier to stop time than the rampaging McGov. Bourkey delivered the goods and the score line now read 17 – 21.


The game continued and it seemed like 17 – 21 would be the final result. A penalty kick would be of no use as only a try would guarantee the win. A penalty was awarded to Mary’s and a lineout was the option taken. Now, more than ever, we needed Fionan to throw like his life depended on it. It actually might have because if it had gone in crooked Lyonsy might have killed him. But of course, as always, in it went – straight as an arrow. The ball was caught and taken down. The clock had hit 80 and was now in the red – any mistake meant the game was over. The call was made – send it out wide. The crowd held their breath and some closed their eyes. Time stood still. The ball was flung out the back and landed in the hands of Jack Hatfull – our Aussie winger. Just returned from a seemingly never-ending run of injuries, Jack wouldn’t be stopped. He ran a straight line down the left wing towards the club house. From our side we couldn’t see how close to the side line he was. We watched and waited, and then it happened. Like Tom Daley into a pool or like a footballer in literally any match of football, Jack dove. He soared through the crisp air like Katy Perry’s plastic bag and landed over the try line. Templeville Road erupted as the referee raised his hand – try for Mary’s!

A last-minute phase of excellent rugby, finished off by a tremendous try, meant the final score read St. Mary’s 22 – 21 Terenure. Heartbreak for one team, joyous celebration for another. What a match and what a win. As our 1st XV sang the Mary’s song on the front pitch, so too did our lads on the back pitch. A great day for the Blue and White! This coming Saturday, our J2s face off against Tullamore in their last game this side of Christmas – so if you’re free, make your way down to Spollenstown and cheer on the lads for their 5pm KO!