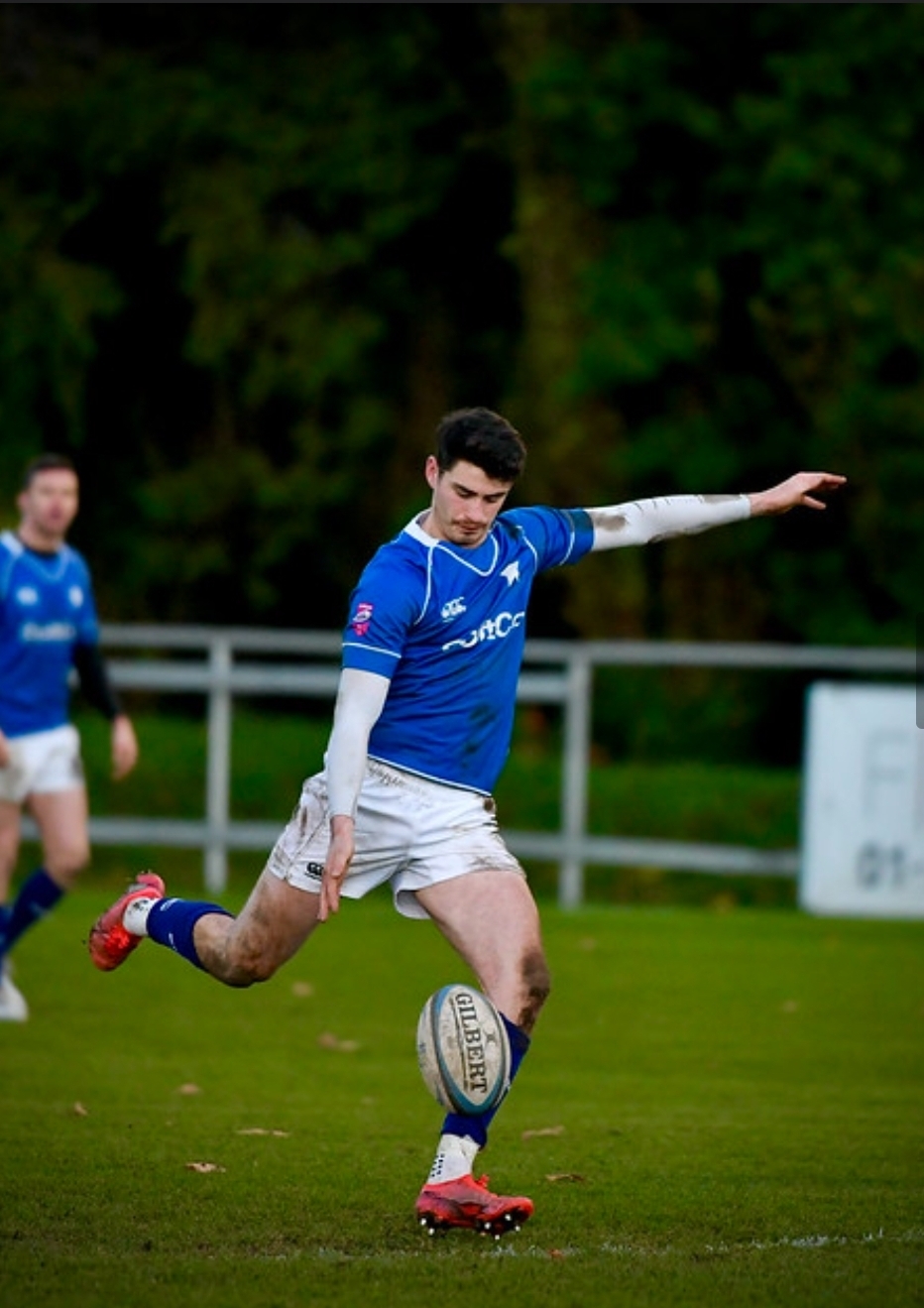 Due to Covid, this was the first opportunity President Patrick Crawford and his committee had to welcome on an AIL visit, palindromic Navan RFC and its president, Rosi Meegan. It is important for the game to see clubs around all of Leinster develop and succeed. Navan has a large and burgeoning hinterland from which to draw players. The club is progressive and ambitious and is doing an important job in producing underage teams, upwards. In fact Navan has come from being bottom team last (unfinished) season, up the table and are now entertaining and competitive. They proved to be so again today. However, they have some distance to go, as they do have a defensive deficit, evident here at Templeville Road. They have a strong pack and some hard runners, with a skilful outhalf, Ben Daly, who played very well.

The game was high scoring and entertaining; it was also a little unstructured and loose. One of the most admirable things about this young Marys squad is their style and adventure. It is exhilarating to see them in top gear, however they also control the game well, with excellent set pieces and devilish defence. These concepts are not mutually incompatible. Today the defence was sometimes found lacking, with too many spaces out wide and missed tackles. We need to be aware of incorrect spacing and balance of forwards to backs in particular areas. These factors will no doubt, all be addressed.

There were some impressive performances. The pack was forceful and industrious. Skipper, Richie, once again led and played excellently, his defence was outstanding with a high tackle count and integrity, and his spatial awareness was notable. Unfortunately, he was injured in a tackle in the second half. He was replaced by Stephen O’Brien, who also showed his ability and strong potential. Ronan Watters, Liam Corcoran and Michael McCormack all showed sparkling class.

The backs too showed their potency, with midfield of Mick and Myles outstanding. At scrumhalf Colm Reilly, who has settled in snugly, had a terrific game, his decision making was commendable, his kicking precise and considered, and his ability to keep pace on the game and inject incisive probes, top class. He stood out and was selected to receive the SoftCo MoM Award.

Now we have won five games in a row, with 25 points from seven games and we remain third behind Old Wesley, by two points, and a further six behind Highfield. Both clubs were victorious today.

We now face Naas, away next Friday night. It is a critical game. Naas triumphed here at Templeville Road, 15-25, in our last game of the ill-fated league, 14th February 2020. We do not harbour romantic or nostalgic memories of the night. That was the first time in AIL competition, that Naas defeated us and should be a signal warning. They are fast climbing with 17 points, they just defeated Shannon, in Limerick, today. We are not great fans of Friday night rugby but, we must bring our top game to Forenaughts to prevail.

Before the game, most influential Conor Dean and David Aspil, failed fitness tests, which required a rearrangement of the team. This may have unsettled them in the early stages of the game.

We played towards the Templeville Road end in the first half. As with last game, we settled slowly and gave away a try within two minutes.

Following a lineout they ran the ball, wide, left to right and back again. Their 12, Evan Dixon, ran between two defenders and scored close in at the Cabbage Patch end. 0-7.

We steadied the ship a little, and started to come to terms with the game. We pressed hard, and following a lineout on six minutes, with picks and drives, Ronan got over and Mick O’Gara converted.7-7. At 16 minutes and after some loose defence, Navan made it 7-14.

It was 24 minutes, when we were awarded a penalty in the middle of the field. Colm Reilly instinctively tapped and skimmed over 35 metres, transferring to fast following and mercurial Mark Fogarty, he passed it on to supporting super Seven Niall Hurley, when he was stopped a ruck formed and it went quickly to rampant Ronan, on a fine vector and he sailed over to score 14-14. The game was 31 minutes old and again from rucks and drives, Richie used his power and low body angle to dive over and we put light between the sides. Once again Mick converted 21-14. That was how the half ended.

The second half was only three minutes alive when mighty Mick McCormack scored and Mick O’Gara made it 28-14. Myles Carey who was doing effective damage to the Navan defence, made it 33 for Marys on 48 minutes, after following up a kick ahead. Mick made it 35-14. Navan got an and on unconverted try back on 55 minutes after a muddled lineout and mix up in defence, and after 69 minutes, Marys added a Mick O’Gara penalty. 38-19. 73 minutes saw Navan score again, under the posts, to bring the score to 38-26. It was 79 minutes when Rhuairi Shields made a neat half break, he passed to ever present Ronan who having made ground passed back to Ruairi and he went over close in. Mick converted, 45-26. During the latter part of the game the bench came on with all doing well. It was good to note the enthusiasm that emanated from the bench, showing the closeness of the squad. To see Podge smiling is pretty terrifying.

You know in your hearts that you are important to the team and the visit to the bleak and difficult ground requires your presence to help boost our hopes, on next Friday, 3rd December. An early Christmas present would be a real boost to all at the club, especially this most likeable of teams; one that exudes friendship and joy in existence. Let us then help them get that present in the form of a win, by being there to cheer and support in every way possible. Remember come along and lend a Halpin hand.

Click below to see the photos of the game submitted by Paul Lundy - thanks Paul!

Here's the squad for the first AIL Division 1B fixture of...

YOUR CLUB NEEDS YOU!Dear Member Happy New Year to you all...

The Club Bar has reopened and we hope to see you in our r...

We have an update on the Online Club Shop for all of thos...

The Club bar will reopen this Saturday, January 8th, from...