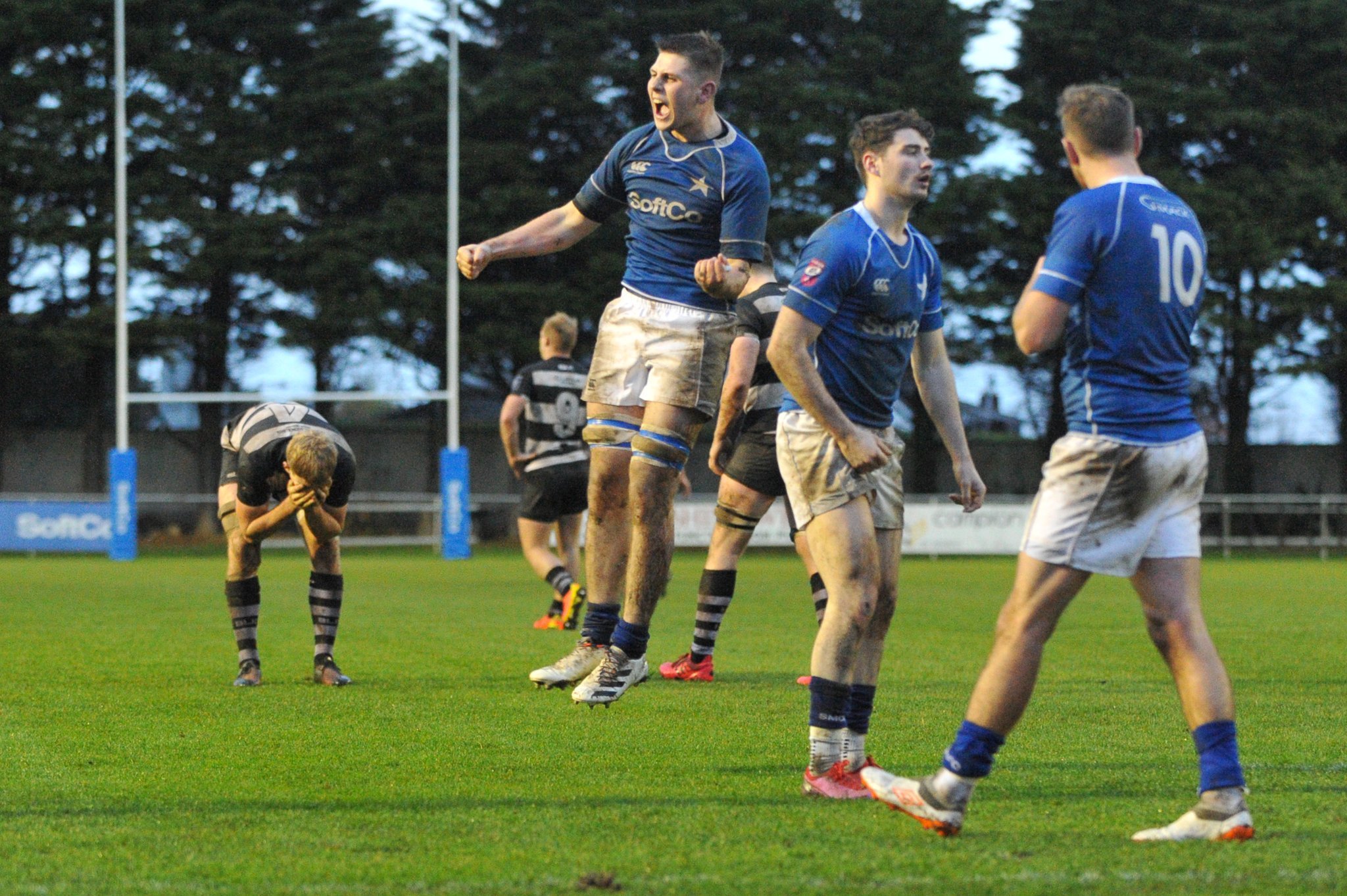 To have won four games in a row is not something easily achieved in competitive rugby. This was the case, when we beat great rivals Old Belvedere today. There was much to admire in the victory, especially the terrifying last six minutes, inexplicably added on to normal time. This was probably the apotheosis, when defence was vitally adamantine and brazenly brave. Yet, there was something, almost frustrating about it all, for it looked at times during the game that we could and would score another two or three tries, yet we spent the end of the game defending for survival. We have played all our games this season so far with totally dry pitches.  This week, the ball and the surface were greasy, and so frequently when we got into max-mode the ball was spilt or turned over.   In fact we turned over a number of balls. That may well have been the reason.  However, as Head Coach Steven Hennessy remarked afterwards, a few years back we may well have lost in such situations.  Not with this team. He is obviously and rightly especially proud of his protégés. Well done to all.

Whenever we play Belvo, we know we are in a match, being formidable opponents always.  They have a particularly large well drilled pack, a clever pair of halves with a Ten with a quality boot, he can kick goals from anywhere.  They were again today real battlers and no doubt, will be waiting hungrily for our visit to Ollie Campbell Park.

All through there was not a player who did not give his absolute, as ever skipper, Richard Halpin, led from the front in all respects, his defence was outstanding. Niall Hurley continues to impress and had a fine game throughout, he played a major part in the first try. Every time Ronan Watters runs out for us, he is a wonder and was again today.  He scored a try that seemed impossible and never stopped working.  Our backs looked sharper and had better width and potency than Belvedere.  The half backs controlled the game well.  David Fanagan’s high-skill versatility is a valuable asset and he showed that again today at scrumhalf, he worked well with superb Conor Dean and kept pressure on the opposition. A player who has been performing consistently at a high level, is Liam Corcoran.  Against a very large pack, he measured well in the lineout and carries, he was also most impressive in defence and rucking, for the entire game. He was a true paladin, and so was accorded the SoftCo MoM award.

This win is a big boost.  Although we remain in third place, we have closed the gap on Old Wesley, who were beaten by Highfield, now being only two points behind.  We remain six behind Highfield, tucked in on the rails and we have widened the gap behind us. We play Navan next week at Templeville Road, they assure us that they will be clear to play after a Covid scare.

The first quarter of an hour was dominated by Belvo, with their heavier pack making ground, as they played towards the Templeville Road End. On only eight minutes, from a lineout they moved the ball right to left and then switched back left to right, with most of the team involved. They took it up hard and as we ran out of cover, their big loose head, Cahir, went over and outhalf Leonard added the conversion. 0-7 on 14 minutes he added a penalty, 0-10. Just one minute later after good work from Ronan Watters, Niall Hurley took a neat ball from David Fanagan and cleverly found a chink, he timed his pass perfectly to rapidly developing Ian Wickham. He fairly zipped along, through the defence over 30 metres.   He was caught on the line and calmly put it back, the ball went to Magic-Mick O’Gara and he shot in low to score a fine try at the cabbage patch end. Deano did the dessert, so it was 7-10.

Now Marys started to build confidence and phases. So followed the most fluent, exciting and productive spell for us to half time. On 32 minutes, we had a kickable penalty awarded, but bravely the skipper decided to take a short one, with Ronan leading the grind, three or four more pick and drives, gave the industrious Liam Curran the opportunity to dive in at that posts and Deano added the two. 14-10; that was the score at half time

The second half was only four minutes old when a rejuvenated Belvo slipped over a penalty, 14-13; as if to say you are not going anywhere without us. There was a close hard struggle then.  We got a penalty from Conor on 54 minutes, 17-13 and they closed again to one, 17-16, three minutes later.

It was 74 minutes, Marys were pressing hard, a switch of direction saw Deano, and Myles make space with sweet links, and ever alert Mark Fogarty was up in support to flick it on to Ronan, he had much to do, but showed great pace to beat a man outside and brilliantly break a tackle to go over in Carvill Corner.  A superb kick from Deano made the score 24-16. Was that the winner? Oh no!

Belvo then put on real pressure, and on 38 minutes following a lineout and a run penalty, they forced their way over, in the well corner for an unconverted try 24-21. Then started the trembles, for Belvo kept up the pressure and although there was no appreciable time lost during the half, 40 minutes came and went, and so did 41, 42, 43, and so on.  Meanwhile they bombarded us, we got two penalties but failed to get out of the terror zone.  We had a lineout on our five metres line which seemed definitive.  When you must make sure, go front to secure! No, A long throw was called, with near disastrous results. But this team is made of sternest stuff, they were not going to be beaten, although it looked truly hazardous, as we were in hand to hand combat on the line and still we held; 44, 45, 46, the whistle went and the referee raised his hand, the superannuated drew in their breaths and felt their pacemakers, legs wobbled.  Was it a try he signalled?  No a penalty for the home side, the ball went soaring over the cabbage patch. 24-21 the end.

It was good to see David Aspil and Tommer O’Reilly back in the second half.

You could see the worn worry path, where President Patrick circled the pitch all game long.  It is a worrying old job. There was a sense of relief and anticipation for more to come. Now that is where you come in.  The support is essential to winning, there are no international games and Leinster play Ulster on Saturday night, so up with you!.  We will be looking out for you and listening for Marys-Marys-Marys. Make sure to come up and lend a Halpin-hand.

Huge thanks to John Crothers for the below picture and more can be found at:

Thanks also to Paul Lundy for his great photos of the match:

You can find up to date fixture information at:Online htt...