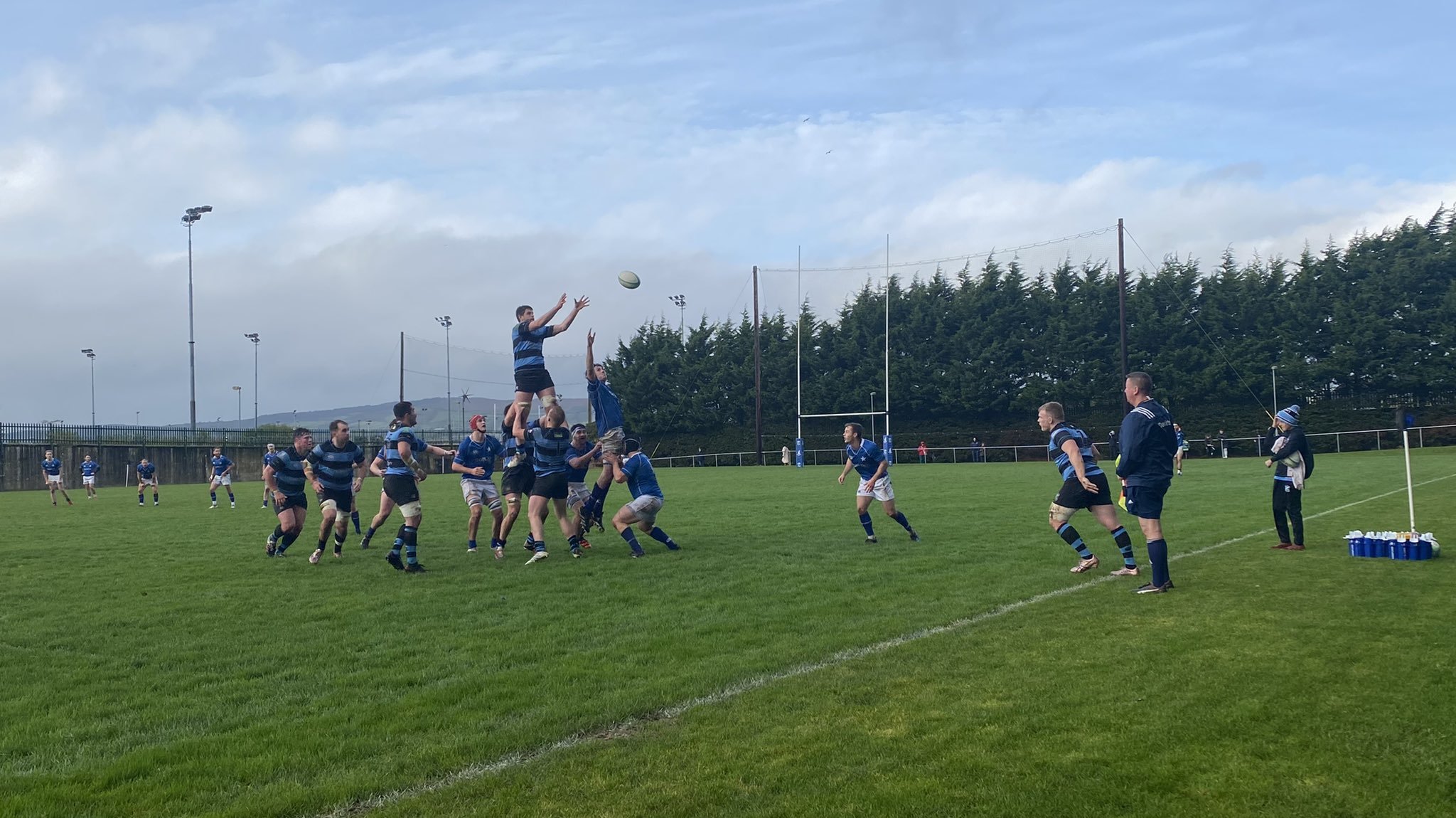 The greatest of clubs have bad days and down days, well this was not one of ours.  This was a truly auspicious day, a day of joy and sporting celebration.  This was a day when a very young, but talented St Mary’s College RFC team battled with committed tenacity; at times to stay afloat against a big hardened Shannon assembly, intent on submerging us in their tidal torrent. Indeed, we may have wobbled a few times, but that glint of spirit and a deep down, and growing, confidence, welled up and carried us buoyant and triumphant in the end.

Over many years now, we have come to Shannon expecting and never failing to find battle of epic proportions.  Fortunes have swayed and changed but whenever we prevailed it has been worth the enormous effort and often pain involved.  A new generations of Marys men, assembled by natural selection and coached and skill-honed by a clever and dedicated group a coaches, came to do battle today and were met by doughty opponents.

The entire game, fortunes rose and fell.  We may have hit the front at the best possible time, and when it happened, we had the guile, poise and bravery to stem the resurgence and hold fast for an historical win.

Leaving Thomond’s storied arena, the abiding memories will be of players, coaches, and management, supporters and committee members, exuding pride in their team and joy in their existences.  V.P, Gareth Roche, Hon Sec, Aoife and Hon Treasurer, Garry Manning were afloat on an alto-cirrus and seasoned supporters, like Flagmen, Kevin Conboy and Pyner, Louis McMullan, Spike, Liam Birkett, were all near a-swoon. Parents such as the Deans, G.Mack, Frank Kennedy, Patsy Fogarty, the Fanagans and Colm and Paula, the genial parents of skipper Richie Halpin, were all floating around in ecstasy.  Last vision was of the DoR Alan Shirley, doing a back flip over the clubhouse.

The serious side of this encounter and outcome, is that we are now third on the table behind Highfield and Old Wesley, with a week’s break and then four in a row including three home games. 19th we entertain Old Belvedere, then Navan, before travelling on 3rd December to Naas and then back home to meet Malone.

After such an heroic performance, we must pay homage to the men who made it all happen, the players or more correctly the squad.  For if ever there was a team effort, this was it.  Each one of the twenty player squad, played his part and it was a vital one at that.

Before it all began, we lost regarded loose-head props, Niall McEniff, Tom O’Reilly and Podge Dundon.  This was obviously a serious matter. Dan Lyons, who performed so well in the backrow last week and who has in the long past played tighthead, bravely agreed to fill in at loosehead.  The only other options were to concede the game or ask a junior or U20 prop to step in with attendant risks.  What a man was Dan, he rose to the occasion magnificently, not only in the scrum but making a formidable contribution all round.  Thank you Dan, you are a true hero.

In fact the front row was superb, with Mick McCormack, once again a colossus, besides his JCB scrummaging, he was involved in everything, driving into opposition, rucking and mauling, and his defence was crunching, with one resounding tackle under our posts, saving a certain try.  The skipper, Richie, as ever made a seminal contribution with his sagacious decisions, his personal performance, his referee interaction and his support of all his players; invaluable.  The second row men, with Liam Corcoran, Ian Wickham and, in the second half Lauris Nikolov, were the essence of productivity, holding the scrum together, jumping and working nonstop in all respects, Liam never stopped and was still tackling and driving after the full 80.  Lauris made a formidable impact on introduction. He is a big entity with a big future if he can stay uninjured.  The backrow faced a stiff challenge, Shannon having a vaunted backrow.  Well they met that challenge head on and were brilliant, Liam Curran back from injury, and playing six instead of normal four or five, got into it and went the distance, he is a fine defender and has a particularly strong sense of positional anticipation.  There is star quality in Niall Hurley, he is strong, fast, unremitting and aware; he was most impressive, he continues on an upward trajectory every week.

When dealing with Ronan Watters, superlatives do not suffice.  Today he was in the stratosphere. Mention of stratosphere directs one to his lineout work which was very important in ensuring secure front ball.  He covered the field like a hunting wolf, he hit every centimetre, and tackled every Shannon carrier at some stage, his turn of pace, his foot work, his power and perception with the ball, all were just marvellous.  He had to be awarded the SoftCo MoM award.

A gem was mined with our securing Colm Reilly at 9, he is a perfect partner for his friend, Conor.  He showed a cool head under pressure and how to take off that pressure by game variation.  He plays the game at pace which is exactly what our game needs.  He has good defence and covers behind very well, he made a significant contribution today.

Once again, Conor Dean was the conductor of the orchestra.  He had a most impressive game. Outhalves are often protected in the modern game.  Deano was not protected today and he stood up and faced down all the fierce pressure that was applied, he tackled like a parental panther, his distribution was superb and his control of the game, excellent.  He had an enormous game and was vital to both tries, added two penalties and a wonderful drop goal in a melee of players, when we were in real need of boost.  He is an essential.

If there is a better midfield combination in AIL than Mick O’Gara and Myles Carey, we have not come across it. Mick is relentless, ever looking for work.  He tackles like a heat-seeking missile and carries with vehemence.  He has a useful knack too of scoring tries.  And he did that with style, today.  His partner defies definition, he is just a truly gifted and fearless player, with an insatiable appetite for work, whether it is looking for gaps or saving the day, he is Myles ahead.  He was brilliant today.

Two young pals, both sons of outstanding Marys men, Craig Kennedy and Mark Fogarty, sons of Frank and Patsy, were up to their necks in it today, when our backs were against the wall they were there, picking off the runners, closing gaps and covering across field. They were and needed to be, like two extra wing forwards today, and still both showed guile, pace and hunger for attack.  Craig played a major role in one of the tries, and almost scored two. Behind them at 15, another member of a great Marys dynasty, David Fanagan, the Jink-King.  He had a top-class game.  He was fearless in the air, picking off the high balls in the densest of traffic and tackled tenaciously, he kept the Shannon defence under pressure too and scored an historic winning try.

The modern game is made up of a squad (of 20 in AIL), rather than a team. All our replacements were vital to success. We have mentioned Lauris, but all played their part in this outstanding win.  Young Daniel Leane and Ruairi Shields, both showed their talent and potential, and were to the fore in the last few minutes when we were under immense pressure. Stephen O’Brien and Joe Nolan are both loyal and extremely fine players, ever ready to stand up and be counted.  This was a real squad effort.

First half was mainly played in the Marys’ half and under heavy pressure.  Deano with and early penalty, and an audaciously brilliant drop goal kept our hopes a-glimmer.  At that stage the heavy Shannon maul was potent and ominous, and their scrum was in the ascendant too. This lead to their building a two goal, 14-6 halftime advantage.

The second half led to their adding a penalty, and we then getting one too, through Deano.  The aim of the supporters at 17-9, was for a possible losing bonus point.  But almost surreptitiously, we started to get to terms and then a little purchase was added and we were into it fast and unfalteringly.  Shannon made sorties up field again and our backs were to the wall and then the courage, belief and camaraderie showed as bodies were flung with abandon under the hooves of the galloping chargers. Too and fro did it go and then, at a ruck a Shannon man came hurtling in from the side and sent defenders flying; a yellow card and a relieving penalty, confidence soared again in the visitors and we attacked their line with increasing intensity, 15 of the blue stars moving in murmuration again and again.  Then Deano did his little dab over the defence, Myles gathered and sent it on partner Mick coming in like an Exocet, He wasn’t going to say no he shot over. 17-16. Delight, a losing bonus point.

What do you mean a losing bonus point, not for our lads, they wanted more.  And they went back on the attack again and soon we were up on Shannon’s line.  The handling and patience of the Marys players were commendable.  They hammered the line, over and back drive and hold, ruck and drive in ones and twos, we were almost over a few times and were careful not to be held up over it.  The ball went out right to left and Deano used his hands to beat the first cover, Myles flung it wide, and it bounced in front of Craig, clever Craig, flicked it outwards with his foot rather than rashly grab at it.  It bounced and David secured it, stepped two, and went in at the corner.  Try.  The small Marys group of supporters were letabund.  Who dares wins!  A few minutes to go.  How many we know not.  It seemed indeterminable, it went on and on and Shannon were in full flow, as they swept up-field with grim ferocity. They met an admirably organised defence, when every blue star reacted and repelled with adamantine grit, the invaders.  On and on they surged and on and on we hit them.  How could it go on; oh no a break, the ball slips, it rolls forward.  Whistle goes. Elation reigns.

Careful not to be triumphalist.  We have faced the opposite situation often enough to know the pain.  Teams and supporters have been going down to Shannon throughout the 90s and early noughties and know the pain of defeat.  However, we are entitled to enjoy the feeling of success in a sporting fashion and Frank is allowed to have a pint of Smithwicks to celebrate the win and his well-deserved Honorary Life Membership.

You can all catch your breath now, write to cousins in Indonesia and tell them all about it and we will resume service, at home to Old Belvedere on 19th then make sure to come up and lend a Halpin-hand.