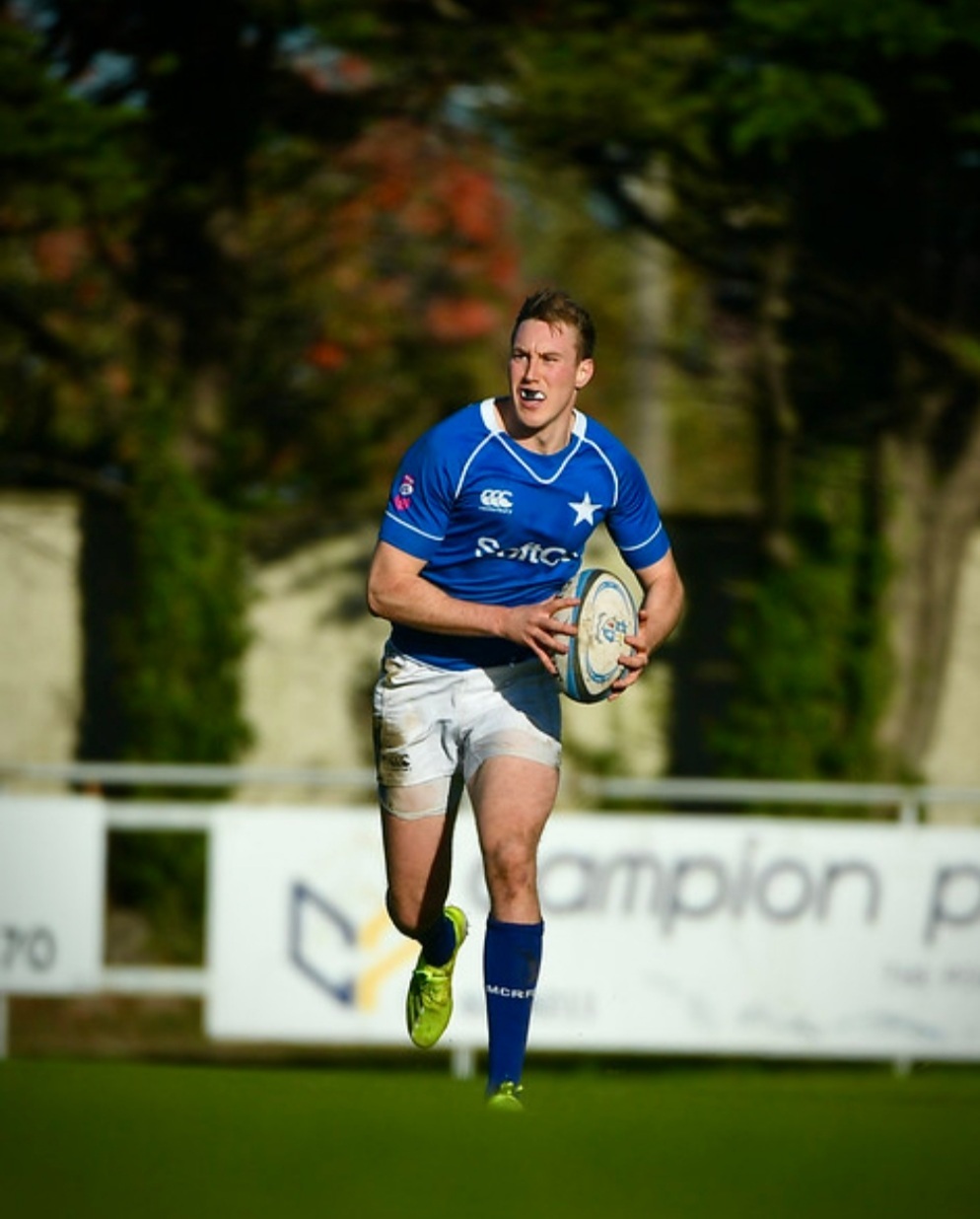 Have a read of D O’Brien's match report from this past weekend's thrilling match against City of Armagh! A brilliant win for the boys at home leaves us in 5th place, 1 point off 3rd place!

In spite of the inundations of the previous two days, the pitch was in perfect condition on a bright and breezy afternoon. And as the sun sparkled; so too the team. It was proof perfect of the fine fusion of coaches and team; a near work of natural art: - a truly goluptious performance. The old saying, “it takes two to tango” is a truism never more evident than today, for Armagh City never flinched nor wilted, and proof was that they scored a try with the last play of the game.  Indeed, during the opening period they were dominant, playing down and with the breeze, their big well-structured assembly threatened and held sway. The whole first half was a dazzling melange of running, rucking and offloading by both teams, as the contest swayed to and fro. Somehow, there was feeling beforehand that this could be a near defining game.  Well if it was, what a definition was put on it; a symphonic poem. There were times when the entire interwoven team, swept up or down the pitch, as a mesmerising murmuration; in rhapsodic harmony. This harmony produced a marvellous performance from the team, so good as to make it a little invidious to mention individuals as honest reporting demands. And in fact every player on the field can walk with light stride. The basis of all top team performances is, stability of the set pieces.  This year they have been commendable. The scrum is tight as super glue and low as a limbo dance, ensuring the laws of physics abet.  The lineout has evolved from liability to lockdown, secure and dependable. And that is how the team’s palette produces effectivity and entertainment.

This overall situation does not just depend on a well of talented and adventurous players, but an overall amalgamation of leadership on and off the field, coaching dedication and ability, nuanced and caring management, and efficient backup, logistics and direction. The looks on the faces of the coaches and management, after the game, in smiling huddles, were a joy to behold as indeed was the gracious radiance of President Patrick, after the game. Today’s victory owes much to the above and this was translated on the field by the unruffled and firmly efficient play and leadership of exceptional skipper, Richard Halpin; he had a sizzler today. Mention above of symphonic harmony, requires a virtuoso conductor, and we have been vitally fortunate to have had Conor (Deano) Dean, return to us from Connacht, as player backs coach. Today, his game was exquisite, he glided through the game, his direction, decision making, kicking (off-tee and off-hand), passing, running, and defence were all immaculate. It was sheer entrancing joy, looking at his play.  He deservedly was awarded the SoftCo MoM award.

It has to be mentioned too that, the inestimable, Myles Carey, scored a brilliant hat-trick and had a delightful game in all respects; he is a real star. One other comment on players is, that, seldom have so many young players made such gargantuan progress since the last campaign, players such as Mattie Timmons, who scored the first super try today, Niall Hurley, who is highly effective and tireless, Liam Corcoran, who has become a first class second row, his lineout work has perfected, but most of all his support play and ball work have blossomed and he will have been overjoyed by his performance today, as will his teammates, and Podge Dundon, who has raised his fitness and application levels remarkably. He was unfortunate to strain a hamstring today. Two new young players recently introduced, are most welcome to the squad, Lauris Nikolov 2nd row (out injured since U 20s), and Conor Reilly, scrumhalf, come to us from Connacht, who had a most encouraging cameo. Injured Hugo Conway and David Aspil, both of whom came on the trip to Banbridge to support their teammates, were also in attendance today. Another bit of good news was the return from injury of Ronan Watters.

After seven minutes, during which, a big well organised Armagh City team had attacked and looked dangerous, Mattie Timmons judged perfectly and picked off an Armagh pass near his own 10 metre line and left the defence in his wake to make it right to the line and score under the posts.  Conor Dean converted. 7-0 Having missed a penalty when it was 13 minutes, on 19 minutes we were caught short as the Armagh backs ran wide in a fine move that led to a try in Carvill Corner. A missed conversion made it 7-5.  It was 35 minutes when Armagh made it 7-8 with a penalty, however, two minutes later a move from our own half, saw Conor Dean chip into mid field and gather the ball, when challenged he tapped the ball firmly and cleverly ahead and the fast following Myles Carey, scooped the ball up and like a brilliant terpsichorean, glided through the defence to score in the Terrace Corner. A fine conversion by Conor from the corner, against a swirling wind, split the posts and it was 14-8 at half time. Playing, as we are happiest, towards the Road end, we hit top gear straight away and soon we were in the opposing 22 and hammering away, and on 47 minutes, following good approach work by Ian Wickham and Ronan Watters, Richard Halpin sliced through the defence and timed his pass perfectly to the hard-grafting 6, Dan Lyons, up in support and he drove himself over, Conor made it 21-8. On 51 minutes and Conor Reilly was taken out late from the back of a scrum, the penalty into Carvill corner was mauled and then when released, by Conor Reilly at 9, to the ever industrious Mick O’Gara, he flicked it on to Deano whose lightening pass put Myles into a slight chink, he whipped through the gap, sliced through two tacklers and over. 28-8. Around the hour mark an Armagh player received a red card for a head high tackle on Myles and an ensuing melee. Peace restored, the game resumed and continued in the same exciting mode, On 71 minutes after a lineout and three phases, the ball came back to Deano in the tightest of space and when confronted he dabbed the ball over the defence and behind the posts.  The ever alert Action Man Myles, evaded the blocking cover and beat all to the ball for his superb hat trick. Conor converted. 35-8. Although with just 14 men, Armagh showed their mettle, as they worked hard carries and kept hammering away until, on full time they worked the ball wide and found space in the Terrace Corner to score an unconverted try.  It ended 35-13.

A breath-taking game that only club rugby can produce; an honour to be present.  Armagh remain third on the table. Well now it is down to Limerick to visit Shannon next Saturday, before a break.  Shannon are now fourth and we fifth, with the same number of points. They are going strong and, as ever, they are formidable opposition. It would be a major boost to beat Shannon away from home and lift ourselves at least one more place.  See how quickly prospects and attitudes change in a league like this.   The last time we played in Thomond Park, we were on the back pitch and had pretty long hike from dressing rooms to pitch.  Let us hope for better this time. Those who have seen this young team play will be avidly waiting to see them again and will be there at Thomond and those who have not may realise what they are missing and make the necessary arrangements to ensure presence. It was uplifting to hear Marys-Marys- Marys ringing out mid second half, today. Let us hear it every game from now on. Don’t forget Saturday 6th November you must come and give Richard a Halpin hand.