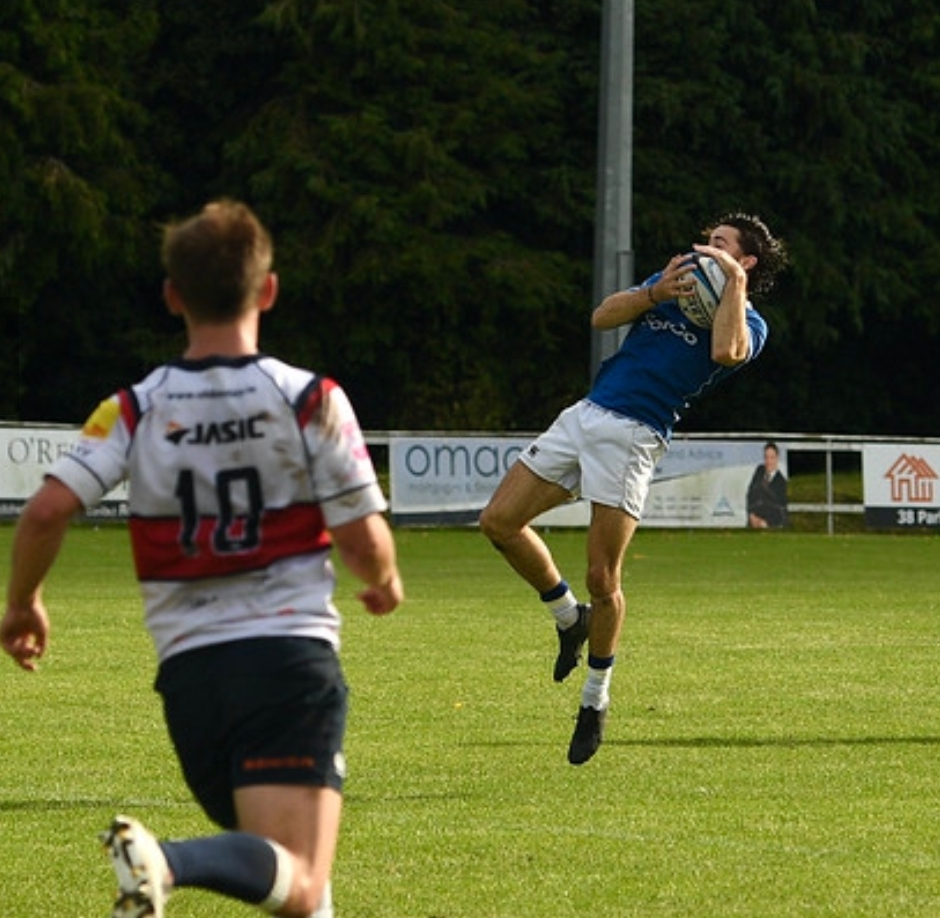 Today it was more “Tropicalville” Road than Templeville Road, the temperature hovering around 20 degrees Celsius and light winds; with anticipation hot too, after the fine but alas, futile efforts of the previous week. Let it be said, this was a magnetic, almost majestic game of rugby, with both sides contributing profusely. As is usual Old Wesley were worthy and sporting competitors, with their behemothic pack and unremitting style.

One upsetting event, during the early second half, was the accidental injury to star winger Hugo Conway.  He was just returning from injury.  A most distressing dislocation of Hugo’s ankle, saw him taken to hospital by ambulance.  Good to relate, his ankle was later relocated successfully.  And all are wishing Hugo the speediest of recoveries.  Meanwhile, he will be very much missed by all his teammates and friends.

On top of that most unfortunate and upsetting injury, before half time we lost valuable scrumhalf Adam McEvoy, which caused considerable difficulty, it would be wrong to be in any part negative about the performance itself, for it was commendable in every way.  This group are showing the results of high skill levels, character and impressive coaching.  The only factor missing is time, in other words the experience, that produces the exact instantaneous decision required under severe pressure.  This will come.  Another positive is that the two teams just faced, are top and third, and we got two bonus points from two games we most definitely could/should have won.

A particular reason to rejoice was, that the lineout was an apotheosis.   All involved must be extremely pleased.  Only one glitch, with on the other hand, disruption and a couple of steals on opposition balls.  When you have near perfection in the set pieces like today, it makes everything easier and more fluid.  The scrum was also magnificent against a considerably heavier pack. The centimetres high scrum is proving Newton’s laws on motion and forces. Outstanding.

There were of course some little errors, with unfortunately, two expensive slips in defence.  However, generally the defence was titanium, and when the frequent bombardment the home side’s line came with those big carriers exploding onto the ball, a groyne of players as it were, stemmed the tide of those Titans’ charges.

The overall performance was high class, with both forwards and backs playing their parts to their utmost, but today was really a day of forward forays and fortunes and the two tries scored were both from forwards. The pack was just magnificent.  The front four involved, were superb and, the captain deserves special mention not just for his bravura performance, but his leadership and decision making, which showed sagacity and nerve. The second row had happy times, the two Liams, presenting precision in the lineout and high rate action.  Once again our backrowers were in battle mode, as minesweepers in behind and torpedoes to the fore.  Niall and Joe are showing their potential, with appetite and aptitude for the fray.  Invaluable David Aspil is a mighty man, with deep power, endless endurance and commitment; carrier in chief!

Warrior Nick, after a highly effective half, in Cork last week, had a volcanic afternoon, both at 7 in the first half and 8 in the second, as he scoured the pitch for action, skittling carriers, driving himself and his teammates forward and effectively controlling the scrum-stability from 8.  He was to be found in the depth of mauls and rucks + and – as required. His clever and effective work rate, skills and courage gave him the SoftCo MoM award.

Not that the backline was on holiday, led with cool control by player coach, Conor Dean (who had to improvise and alternate between 9 and 10 after Adam’s departure), every man put his being on the line.  You could see the golden mane of talented Myles Carey quartering the pitch, prodding and probing, hungry for work and well aided by all his comrades.

Both teams got down to business straight away, for advantage.  Marys opened the scoring with a penalty after six minutes. It was back and forth for nearly 20 minutes then, we got penalised and yellow carded for a deliberate knock-on.  Soon it was 3-3. And on 33 minutes Conor made it 6-3, three minutes later it was level again.  6-6 at half time.

The second half, after 47 minutes and after a lineout, Old Wesley ran against the line and after several phases broke a tackle and scored under the posts.  It was then 6-13. We put in a spell of high intensity play that were rewarded after a multi phased series of pick and drive on the Wesley line, when a determined drive and dive by Tommer O’Reilly gave us a just reward.  We were level when Conor once again was accurate with the boot.  13-13.

It was 63 minutes, when Old Wesley were playing penalty advantage, their 10, Josh Millar, put a cross kick over towards Carvill Corner and although Ruairi did well to take a very awkward bounce, we were short of support and Wesley swept over and recycled the ball came out, a tackle was broken, 20-13.

It was a severe blow, but true to spirit we unleashed an onslaught and on 70 minutes, we won a penalty.  It was very kickable but the captain made the brave decision to go for the corner, following a lineout in the Cabbage Patch corner, Marys formed a gigantic maul, and rumbled on for skipper, Richie to steer and ground at the corner.  Conor just failed to convert.  18-20.

There followed a harrowing last period with our fighting for every centimetre and every ball.  We worked hard and worked up to the Well Corner, took a lineout, we crabbed across the pitch, drive after drive.  Could we get the three points, would there be a penalty? We surged and they repelled, we surged again, and again and when on the line and on the 80, the whistle went, it appeared to all nearby, a penalty for Marys and a great chance for a great win.  There was a stunned silence from all in blue, and jubilation from all in white, the penalty was award to the visitors. It was the end 18-20.

In spite of the loss, the atmosphere after the game was bright and optimistic, not only for a commendable performance but for being back home after the long Covid layoff and lockdown.  Everyone was so happy to see each other; Old Wesley friends and Marys, members all happy together.  All chatted, President Poff of Old Wesley (whose son played 12 today,) was chatting with our President Crawford and VP Gareth Roche.  Great old Wesley men were there, Chappers and the ubiquitous Ken Richardson, who was photographer for the first game, and touch judge for J1 game.  So many Marys’ faces were elated to have AIL and rugby and friendships back.  Professor Mick Farrell, Dr Dave Ryan,  Paul Davey and friends (or is that an oxymoron)  The truly great Steve (Jemmo) Jameson and Eimear, Big and kind Charlie Barry, Reggie and Noel and Dave Donohue and all that gang, including one of our favourite sons, Patsy Fogarty, looking in top fettle.  Truly great to see him, especially.  Indeed good to see everyone, including DoR Alan Shirley and his brother Stephen, our hard working executives, with our new and highly efficient and popular hon secretary, Aoife O’Donnell chatting with Liam Byrne.  Then there too was our Leinster Rep Eoin Quinn and Niall (Rynner) Rynne the Chairman of IRFU Management Committee having a drop but not at the bar. The Ebbs were there in force, including our new young press officer, Harry. Top Club ambassador, and universally popular, “Sir Michael” Fanagan, was to be found in the middle of his many close Wesley and Marys friends. John Ayling had as ever come over from his home in Clontarf to his spiritual home.

Our invaluable and irreplaceable club administrator, Marie Hammond, was still working away, having already organised everything for the day.  She managed a never before, achievement. She produced, with the help of ubiquitous Mossy Davin, the St Mary’s College RFC Year Book 2021-22, ready and on the tables for the first home AIL game.  Congratulations Marie.

How could anyone swap an afternoon of You Tube for all of that?

Next week we travel north to Banbridge Town in the county Down. They are a hungry team who, like ourselves, have yet to win, they stand 9th to our 8th.  Obviously we need big support.  Get a few together, even bring the granny she can go shopping if unenlightened. Bring the egg sandwiches and have a picnic; or sample an Ulster fry.  But come, you are needed to give Richie “a Halpin Hand”

You can find up to date fixture information at:Online htt...