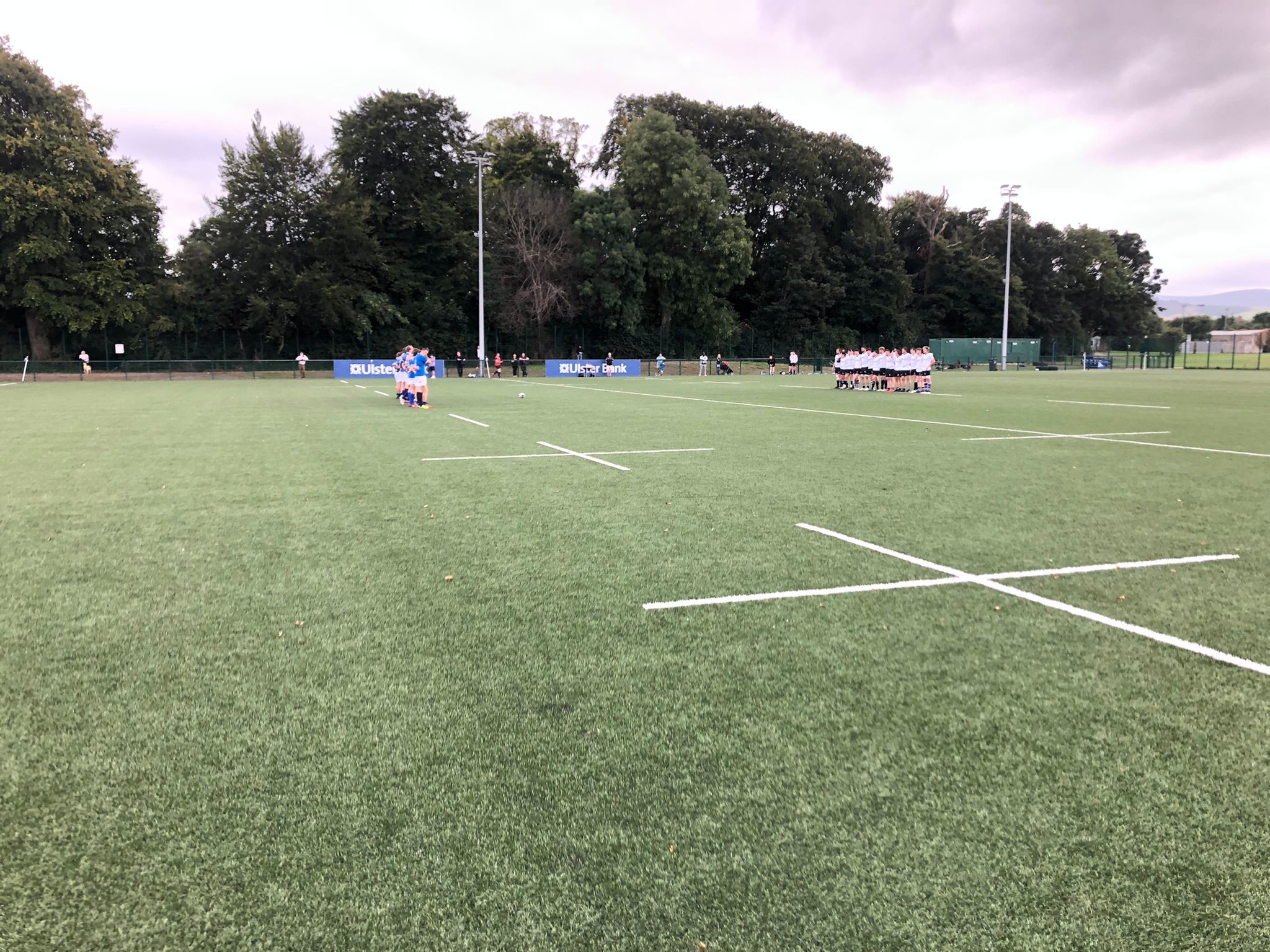 Not many people would deny that the greatest rivalry in Irish club rugby exists between St. Mary’s and Terenure. There is a certain feeling in the air before any “D6W Derby”, and it cannot be explained - only experienced on the day. Making the long and arduous trip from Templeville Road to Lakelands only allows tension and excitement to build as you prepare for the biggest league game of the season - every match with Nure feels like a final. A do or die match where only one outcome is acceptable. This might seem like hyperbole but to Mary’s and Terenure alike, it isn’t.

Conditions for the match were perfect. A warm and cloudy day with almost no wind. As our 1st XV battled their 1st XV on the front pitch, we were playing on the 4G pitch. While a 4G pitch allows for rugby all year round regardless of weather, it has the unfortunate effect of giving the sensation of playing rugby on a carpet - and not a magic one. Knee and elbow burns are a regular occurrence here and if you don’t catch the ball from a kick, even God himself couldn’t predict in what direction it might bounce. Our J2s however were ready for the task itself - a revitalised J2 squad of seasoned veterans, new players from our U20s setup, and even a few new Mary’s recruits made up the team. It was our first league match of the year and only our second full-length match this year - but that didn’t matter.

We started off the match well, and two minutes in the steady boot of Jack McSharry had us 0-3 up. However a little slip of concentration allowed Nure in for an easy try. 5-3 was the score. Three minutes later as we marched up the pitch Jack put another 3 points on the board from our 2nd penalty in seven minutes. 5-6. Twenty more minutes of bruising rugby followed until Al McPhillips decided that a cynical foul from Nure warranted a receipt, leading to a yellow card for both teams. A penalty for Nure meant the score was now 8-6. Just before half-time, the steady boot of Jack McSharry put us in the lead going into the break - the score was now Nure 8 - 9 Mary’s. An intense first half where Mary’s were impeccable in defence and only for a few soft errors we could have led by more. Our back line ran phase after phase of good running-rugby and our forwards were incredibly dominant in each scrum. We were left dumbfounded as the referee repeatedly penalised our lads for being too dominant in the scrums - I wish I was making that up. A quick team talk from the coaches and senior players at half time stirred our lads up and nothing would stop them from winning this match.

The 2nd half started off strong with big hits and brilliant runs. Al McPhillips showed the younger lads how to be a great number 9 with precision passing and countless sneaky breaks off the back of scrums, mauls and rucks - he played so well that we almost forgave him for his sin bin earlier in the match - almost. There were a number of scrums won by us (and then penalised for doing so) and our lineouts were accurate and efficient, as were our jumpers and lifters. Our mauls were fantastic and our rucks too. On the 60 minute mark, we got a penalty and kicked to touch - Niall Donovan putting his GAA boot to good use and hitting the 5m flag. The lineout went to plan and Bev made his break barrelling through. A quick turnaround of the ball went to captain Fionan Magee who thundered over the line - a well deserved try for Fionan who played out of his skin and led the boys brilliantly. Nure 8 - 14 Mary’s. With 70 minutes gone, Al McPhillips made a break and no one could catch him - legally that is. Just before he crossed the line in the corner, an extended arm from Nure clotheslined Al and resulted in a penalty try for the ‘Boys in Blue’. Despite this being an extremely dangerous and cynical wrestling maneuver - only a yellow card was given. We do however wish their player the best of luck for when he makes his debut in the WWE soon. Nure 8 - 21 Mary’s.

Ten minutes left. Our defence was never rattled but eventually Nure got in for a try with three minutes to go and the score was now Nure 15 - 21 Mary’s. Our game-plan remained unchanged and we kept pressing forward. The 80 minutes was now up and we had a penalty near the touchline. Go for goal was the call. The kick just slipped wide and Nure ran it. We turned over possession from a knock on and the try line was in sight - and then the whistle went - no advantage given. It didn’t matter however as the scoreline read: Nure 15 - 21 Mary’s. There were quite a few fans watching and it felt great to sing the ‘Mary’s song’ in front of them after our first league match - and even better to sing it in Lakelands! It was almost impossible to pick a man of the match so instead we’ll do some special mentions - our two starting props Ali and Fionan were incredible today. The scrums were dominant and their running play and defence was unmatched. Bev in the second row put in a characteristically superb performance - nothing can match the skill and talent of Bev when he hits his stride. Beside Bev in the second row was Shane Fanning making his return from injury. Lineouts were stolen, tackles were crunching and rucks were overturned. He was super. The pack in general were incredible.

In the backline at number 9, Al McPhillips turned back the clock ten years and put in the game of his career - he did nothing wrong (except be sin-binned that is). Jack McSharry at 10 ran the game his way and was vocal and commanding - not an easy task being one of the youngest on the pitch - but that didn’t phase him. Al and Jack together are phenomenal. Throughout the game Andy McCarthy put his body on the line repeatedly and didn’t miss a tackle - and when he gets the ball he can’t be stopped. I could keep writing and name every player on the team because not one man gave less than 100% on the day - they should all be proud of the shift they put in. So roll on this coming weekend when we face Tullamore at home!

We have a massive announcement to make!We are delighted t...

It’s finally here - The Ladies' POETS Lunch is this Frida...

This Sunday at 3pm, our U20s face off against Terenure RF...