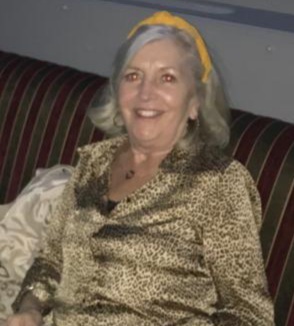 It's with tremendous sadness that we've had to say goodbye to Eileen Fanning - one of the finest people to ever grace Templeville Road.

To Declan, Thomas, Darragh, Aisling and Shane, we send you all the love in the world and we want you to know that all at St. Mary's College RFC are in mourning with you.

Eileen will also be greatly missed by her brothers Jack & Kieran and her sister Margaret; as well by her grand-daughter, daughter-in-law, sisters-in-law, nephews, nieces, her extended family and her wide circle of friends and admirers.

Eileen was an incredible woman who loved the Club more than most. There wasn't a match she'd miss or a function she wouldn't attend. It didn't matter if she was the only woman there - that wouldn't stop her. When she was watching a match she wasn't known to hide her feelings and we can only hope some of the referees didn't hear what she said about their performances. And God help you if you criticised one of her son's performances in her presence - only stupidity or naivety would cause you to do that - you wouldn't do it a second time either.

From coaching minis, running the club shop, to supporting charity events (even when her own health wasn't the best) and to running the away match bus trips up and down the country with Joyce Farnan - there wasn't a job in the Club that Eileen wouldn't volunteer for. On those buses to away matches you'd only need to give a look and you'd have a coffee or tea in your hand (an Irish one if you asked nicely). There's very few people in the Irish Club Rugby scene who weren't aware of the kindness and generosity of Eileen

It's impossible to put into words how much she'll be missed by us and by her friends. Irish Club Rugby, and St. Mary's College RFC in particular, have truly lost one of their greatest ever supporters. One thing is for certain though - St. Mary's is far better off for having had Eileen all these years, than it would have been without her.

Eileen we love you, we miss you, and we'll see you again down the line.