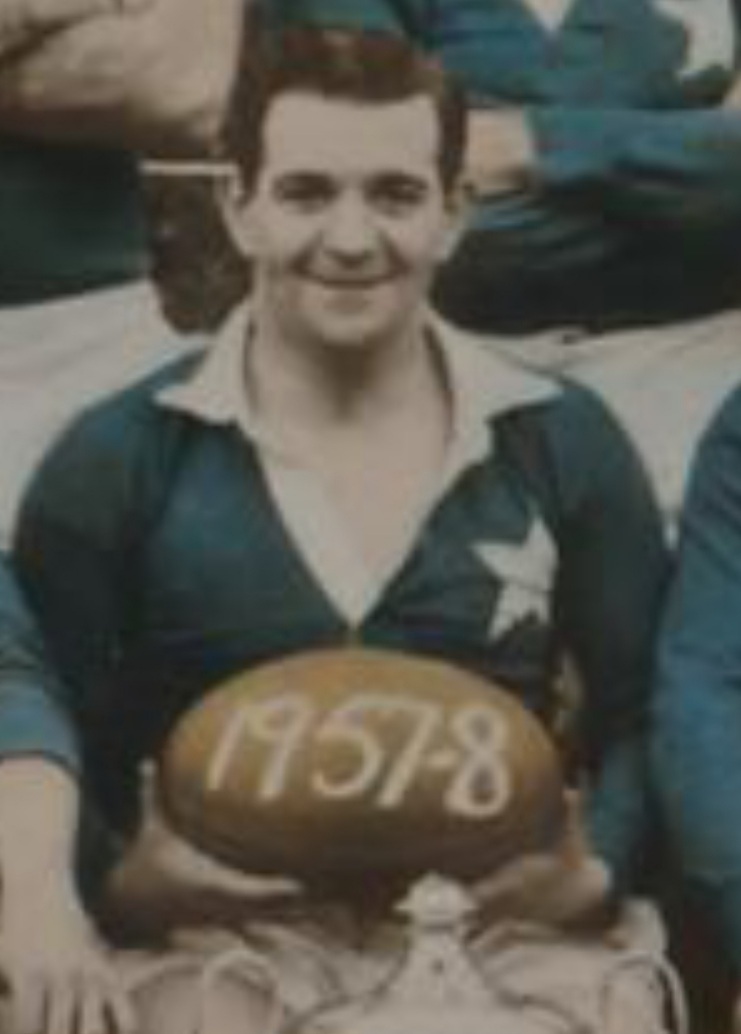 The deep sadness that hits us all, for the death of Joe Fanagan, is of special kind, for St Mary’s College RFC has lost a unique character, a beacon of St Mary’s and everything it means. Not just because he was a Fanagan, one of our revered Marys’ families which has been involved in our club since its early history, but because he was Joe.

Joe had been in school at St Mary’s College, and Clongowes Wood College, before he came to St Mary’s College RFC. Being a Fanagan, he was endowed with great abilities, sporting, socially and in business. He played scrumhalf, through the 50s and 60s. Not only his ability, but his inspirational leadership shone through and in the season 1957-58, as club captain he led his team to highly acclaimed success in the Leinster Senior Cup (LSC). The LSC was at that time, the most highly prized and difficult to win trophy in Ireland. That LSC win, was the first in St Marys’ history. It was well celebrated, however it was the ambition, confidence and belief that Joe had infused into his team that was vital. For those same characteristics became part of the St Marys psyche and led to the outstanding future successes of the club. That spring day in Lansdowne Road was a seminal event in our history; and Joe and his team must take credit.

As a player Joe was happy, he had an impish snipe from scrums and ruck, and a great understanding with his outhalf, the wonderful Sean Cooke. He read the game well and never shirked. He was renowned for the most outlandish dummies of all times, stories abound of spectators buying his dummies on the black market. His most famous dummy perhaps, was in a cup match in Lansdowne Road V Bective Rangers. Joe broke hard down the blind side and was faced by the fullback. A young touch judge was keeping up along the line, no players were up with Joe, the crash tackle was coming, Joe threw out a brazen, dazzling dummy, the touch judge was flattened and Joe scored. The three of them had a pint afterwards; or maybe it was an Irish-Coffee.

When that cup was done, Joe wasn’t, he played on and during the sixties he captained the 2nds (J1s), played down and was major influence on young players on the way up. He was involved in committee work, and IRFU, his astute judgement of the game and players, led to his becoming an esteemed Irish selector (Big 5), and later chairman of selectors. His continued work in the club saw him appointed President St Mary’s College RFC 1979-80. It was bountiful year for trophies, with success in the Leinster Senior League (LSL) and several junior trophies. Of course being a Fanagan, he also continued to play golf all his life. He was a very popular member of Milltown Golf Club. He was a good golfer, perhaps not quite up to the standard of some of the family. He was captain of Milltown Golf Club and had the joy to see his son Jody, captain Milltown GC in their centenary year. While on golf, Joe’s wife Rhona captained the Irish women’s golf team and Jody’s sister, Suzie played on the Curtis Cup team while Jody played on the Walker Cup team and beat Tiger Woods. This is the only example of a brother and sister playing concurrently on the two teams.

Joe married into another famous rugby/golf family, the Murrays. Rhona, his wife and he were inseparable all his life, and she has been his guardian angel, during the last few years when he was not well. His family were always part of St Marys too, Jody of course was a schoolboy star and very fine senior outhalf at the club; Joe’s elder daughter, Denise was club physiotherapist for a number of years. His nephews, brothers David, and Michael, have also been Past President’s of the Club, and continue to have active roles in the Club.

Being a Fanagan, meant Joe being involved in the family business, he loved it and he became head of the company, a position his son Jody now holds. Joe was the perfect funeral director, his sympathetic nature and dignified demeanour ensured bereaved families were cared for in every possible way. After he retired he continued to look after funeral ceremonies up to a few years ago.

What a lovey person was Joe, he had a particular joy within his very existence. All age groups in the club and elsewhere related to him. Whenever he came into company, a warm happiness would suffuse the room. He had a distinctive, sonorous Fanagan Voice that was most attractive. He chatted freely with everyone, and everyone seemed to know and like Joe. No one could ever do anything but like Joe. With his friendly nature he was greeting people constantly, it was impossible to remember everyone’s name. He devised a method he became well known for, he called everyone Banana, and it worked wonderfully well, it became almost a term of endearment. It is clear that Joe was a very clever multi-talented man. As a rugby judge he was much sought after. A respected coach sought out Joe to advise on player selection and Joe went carefully through each player and their abilities, to the admiration of the coach. They selected the team, only to see 15 Bananas run onto the field the following Saturday.

Joe never minded what level of rugby it was; if it was St Marys he wanted to see it. He came to matches regularly up to recently. He loved to see the U20s play, as he saw them as the future of the club he loved so much. It is only fitting that the highest grade U20 rugby competition on the island is named in his honour. The J P Fanagan League

FANAGAN, Joseph P. (Joe) (Rathgar, Dublin) 1st February 2021 peacefully, at home, in the care of his loving family; beloved husband of Rhona and adored dad to Denise, Jody and Suzie (O’Brien). He will be so dearly missed by his family, daughter-in-law Alison, son-in-law Andre, his five treasured grandchildren Hugo, Harry, Stephen, Clodagh and J.P., his brothers-in-law Paul and John Murray, sister-in-law Myra, nieces, nephews, extended family, his work colleagues of whom he was so proud and his wide circle of friends.

A private family funeral will take place at this time due to Government restriction. For those who would like to view the Funeral Mass online please go to the link HERE on Thursday (4th Feb) at 10.00 am. Family flowers only please, donations if desired to Our Lady’s Hospice, Home Care.

For those wishing to offer their condolences, please use the online condolences book HERE

May He Rest In Peace.

Huge congrats to the winner of our monthly €1000 club dra...

AGM Update - AGM to be rescheduled