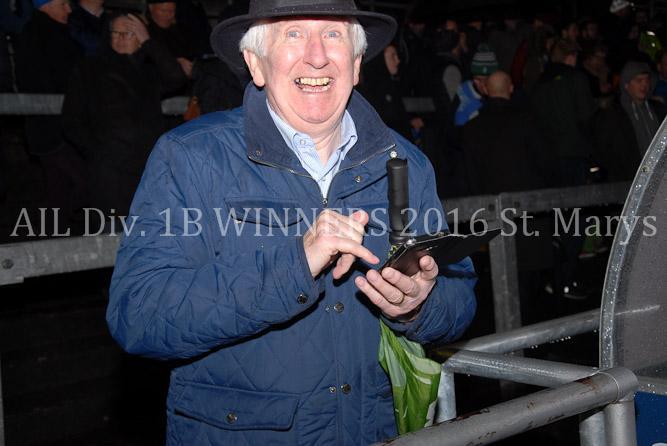 It is with regret that we inform you of the passing of past President Jim Murray.

Jim Murray has just died. All who knew him will mourn deeply, a member, who was a deep blue St. Mary’s College RFC man. This blighted year, 2020, has cruelly taken some of the club’s greatest men and now has added to its list.
Jim has not been well for a number of years now. His devoted wife. Rose, has unwaveringly cared for him throughout his illness. Jim never whimpered, as ever, he bravely wore his engaging smile and his floppy hat to the end, without loss of love or hope.

In 1959, a gangly young man with a smiling face and a willing heart, joined, what was to be his club for life, straight from school at St Mary’s College. He was the epitome of a team man, never shirking and always supporting others, on and off the field. That affability he showed then, was to make him an admirable and ever active ambassador for the club he loved. He was of course a fine player and played at several levels including senior.

Being a successful insurance man, his job took him to Galway for a number of years and while there, he played for Galwegians RFC, where he was universally popular and admired. He kept friendships with his teammates of that time, all his life and spoke fondly of Joey Costello, Danno Heaslip and Michael Casserly (A International) with whom he shared the second row. In fact that was an admirable trait in Jim, as he kept lifelong friends from many walks of life, and geographical locations. Up to his death he was a close friend of former Marys’ player, Pat Drennan who lives in Australia.

When Jim returned from Galway to Dublin, he continued to play, taking up where he left off. When he retired he became involved in club affairs and was the first to volunteer for any job, big or small. In time he got the biggest job the club can offer, presidency, in 1987-88. He was an effective and exceptionally popular president. He greatly cherished and enjoyed his time as president. It was a truly happy presidency, as all involved attest. He continued to be involved in rugby matters after his presidency, and was an active supporter up to this year. He travelled to most of the away AIL matches. He was a knowledgeable rugby man; and most of all in his more mature years, an outstanding ambassador for his Marys. Never, was a visiting alickadoo left standing alone or without a beverage, when Jim was around. He was thus, immensely popular throughout the rugby world and rightly so.

It was great joy to Jim, that his son, Eamon, played for St Marys and is still an active and popular member.

Jim’s passing has added a dark cloud over our club and pain to all who knew him.

We have lost a quintessential St Marys’ man.

MURRAY, Jim (late of Stepaside, Dublin) December 15th 2020 (peacefully) at Our Lady’s Hospice, Blackrock. Beloved husband of Rose and much loved dad of Claire and Eamon. He will be sadly missed by his sister Margaret, brother Tony, daughter-in-law Áine, his adored grandchildren Jack, Charlie, Joe and Daragh and all his many friends, particularly those in St Mary’s College RFC.

With heartfelt thanks to the caring staff of Our Lady’s Hospice, Blackrock and of St Vincent’s University Hospital, Dublin.

In accordance with government guidance a private funeral will take place at 11.00 am.

Prior to the funeral tomorrow (Friday) 18th December the cortege will pass through the grounds of the Rugby Club at 12:45pm sharp.

Please note, to facilitate this mark of respect there will be NO PARKING in the club grounds, and you are kindly requested to park in Templeogue College or neighbouring roads.

May He Rest in Peace.