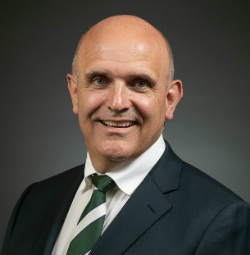 We are delighted to congratulate Niall Rynne on his appointment as Chair Designate of the IRFU Management Committee. Niall will assume the Chair of this committee, the main committee of the IRFU next season.

A past pupil of Templeogue College, Niall is a longstanding member, past president of the club and has held a variety of roles over the past 25+ years in St Mary’s College RFC. His amiable nature, willingness to help and vociferous support on the terrace during matches endears him to all members and players, both past and present.

We wish Niall the absolute best in his new role and are immensely proud to have him as an esteemed member of our club. Congratulations and the very of best wishes from the whole club.

As a result of his IRFU appointment, Niall has stepped down as the club’s Leinster representative. We are also happy to advise that Michael Fanagan will be acting club representative to the Leinster Branch until a permanent appointment is made shortly.

We are asking members who are interested in being considered for the club Leinster Representative role to express their interest by email to honsec@smcrfc.comby 31 December 2020.