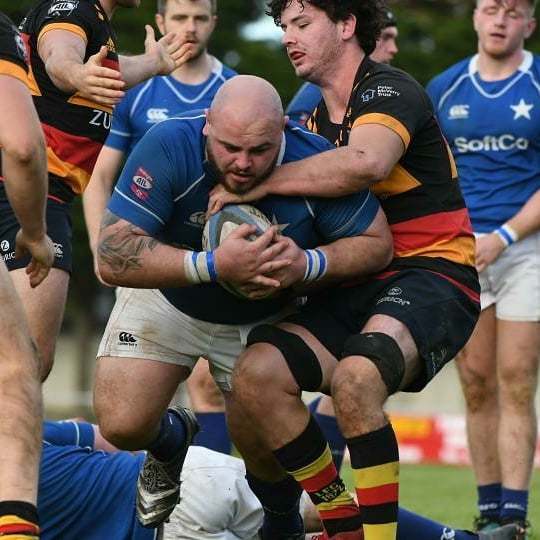 Observing the desolate terraces, the hollow almost ethereal, resonances of the scant voices, brings a strange, sad nostalgia, with memories of gigantic jousts and clamour, wild, sideline scenes and emotional animations. Oh’ for those lusty days, the safe mingling, the healthy fears, not for contagion but for sporting outcomes. Looking at those red, yellow and black stripes; then the much loved star dashed blue and white regalia appear, stirs the senses to the their vibrancy and the youthful, optimistic puissance. Thus the cold, contumacious, Covid Canopy collapses, as the sun glints, shimmers, and blinks the eyes. So joyous hope returns, the game begins. And what a game it was. Games such as these do much to boost forbearance and optimism. Both teams can be proud of today, as indeed can Steve Hennessy and his colleagues; and our one time AIL hero, Mark McHugh (who was indeed most welcome back) and his. There was an effervescence about the game, it was played with pace, skill and uplifting sportsmanship. As is often the case for St Marys, there was noticeable discrepancy in size between the two sides. Lansdowne lining out behemoths. They also had some real top class experience in their side, especially in their big backrow. Our lads did not notice.

There was once again a disappointing aspect, having had a little more possession, territory, strikes, and actual tries, physically scored, our penalty count (including a penalty try) conceded, was higher and so we lost the game. That said there was very much to be proud of, with a notable fluidity and continuity. In the first half when playing towards the Road end with a strong wind, we did not use that advantage to kick to Carvill Corner, that glue spot for defences. Speaking of which, the home defence was well organised and effective. Indeed, in all-round high levels, there were some performances of special note. The backrow again worked hard. With periodic exceptions, the lineout was fluid and great credit must be given to Liam Corcoran, who runs the lineout efficiently and makes a major personal contribution. (Congratulations to his brother Conor who made his first senior competitive start in that backrow).

The class of Myles Carey shone out today, as he conjured some magic moments, while unselfishly, he worked in both attack and cover defence. A person who needs special mention, Mark Fogarty. Mark is not the biggest player, but none has a bigger heart. He is fast, skilful and brave, his work rate is high; he gets hammered and he is straight up again, looking to do more. His positional play improves each game, and his ability to attack a line is notable. He had a fine game, flanked by two top wingers. Having said that, it is almost invidious to mention individuals today, as every player who took to the field showed that old Marys’ spirit that has carried us favourably through 120 years of history. Although one who must be mentioned is Jerry Sexton, who is very welcome back to his old club and to his old friends. It is a real boost to have Jerry back after his successful spell in the professional game. David Fanagan and Nick McCarthy were missing due to injury, but two other highly influential players returned from injury, David Aspil, part of that backrow, and prop Mick McCormack.

From kick off it was clear that both sides were willing to play. Therefore it was a pleasure to watch. After a number of attacking phases, with Hugo Diepman and hard-working Podge Dundon involved; on seven minutes, Myles made a stinging run from right to left and made good forward progression, he gave the ball to the ever supporting Mark, who made some ground and gave the ball to flying winger, Mathew Oppermann. He was in a mangle of players, he just stepped and subtlety, slalomed through three, and went over in the Gate Corner. Mick O’Gara converted comfortably. Near the end of the half, Lansdowne had a strong patch with lots of possession and several phases of attacks on the home line. The defences stood hard and fast. Then in injury time, our scrum came under pressure on our line and on a third reset, in the Well Corner, the referee went under the posts and the score at half time was 7-7. Unfortunately, we lost the impressive Niall McEniff to injury in the first half. The second half Marys stepped up the pace further and put considerable pressure on Lansdowne. A fine penalty, Mick O’Gara made the score 10-7. But the visitors equalised, before going ahead with about ten minutes to go, and we could not make up the ground in spite of great effort. So it ended 10-13.

Losing is never easy, but having played with undying effort and skill, made today’s loss more digestible, certainly from the supporters’ point of view. Showing now, since games returned, that we can compete with AIL 1A sides, such as Lansdowne, gives vital confidence and experience. It will take a little more time to get the scrum back to the imperious prowess of last season, the errors and penalty counts will ameliorate. Steve has a very fine young coaching team with him and it augurs well. It was very good to see a 2012 AIL medal winner, Colm McMahon (son of Pat, one of the most dedicated St Marys’ supporters), who Steve recruited, there today, helping out. He was a fine player and an exceptional young man, there is little doubt but he will be a big success. (He even drives himself now L). We must not lose sight of the work being done by Steve Hennessy, Jamie Cornett (congratulations to Eimear and Jamie on the birth of twin boys. Their names are down don’t worry), Mark Sexton, the invaluable Marcus O’Driscoll, Colm, Robert Sweeney and Paul Brennan. Also the management under Paudge McGill, Ruaidrí Moran, Ian Bloomer, Paul Conlon and Conor O’Neill); this is a tough number under present conditions. All rugby has to be kept alive, organised and informed, that falls to the hard working RC under DoR, Alan Shirley, with Eoin Quinn, Kevin Conboy, Paudge McGill and Stephan Shirley. We look forward to next week’s game away to Naas, Covid permitting. Please all be patient and support as much as possible, the club and all those who are working hard to keep rugby alive for us. All of us in club, community rugby, must pull together and try to stay within the guidelines; and by staying safe, keep others safe too.